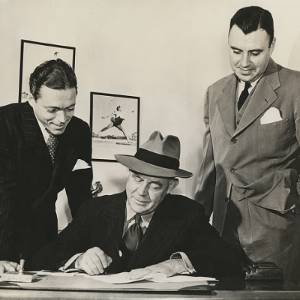 No matter the story—from the catastrophic to the mundane—reporters must find a way to communicate the news that is engaging and fresh. Journalists are called to uncover the news with speed, accuracy and style. Since the early days of news reporting, artists have worked alongside correspondents, often risking their lives. Because of the efforts of these men and women, our understanding of world events has been enriched and bettered.

In today’s busy world, newspapers, television and the Internet are where most Americans get their news. But prior to the 1960s, when televisions became affordable to the average family, newspapers and radio were the ways that news was reported. This exhibit gives a glimpse into the ways that news has been delivered in the course of American history, from front page news, editorials and photographs to political cartoons, and includes works by Tom Little, Charles Bissell, Grantland Rice, Fred Russell, and John “Jack” F. Corn.