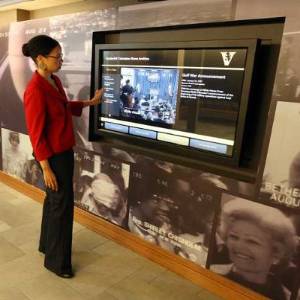 Vanderbilt’s Television News Archive is the most extensive and complete archive of television news in the world. Vanderbilt has been recording the national news continuously since August 5th, 1968, initially capturing the daily broadcasts of ABC, CBS and NBC, and later including daily broadcasts from CNN and Fox News. The Archive’s collection also includes live coverage of numerous major news events, presidential speeches, press conferences, and other public appearances. These reports cover the news as it was being made and reflect our global history in a way that is immediate and powerful. This exhibit shares selected excerpts from the thousands of video news segments contained in the archive. The exhibit is updated annually to highlight the top news stories of the year that were broadcast 50, 40, 30, 20 and 10 years back from the current year.