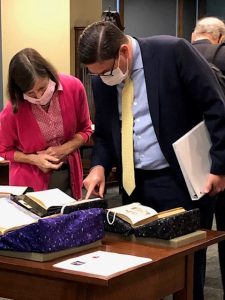 On October 6, the Ambassador to the United States from Colombia, Juan Carlos Pinzón, visited having asked to see the libraries’ rare special collections on Colombia. Paula Covington, the Latin American and Iberian Studies Librarian and Senior Lecturer in Latin American Studies, prepared a wide range of the treasures for him to see.

He then spoke on Colombian-U.S. relations at an event co-hosted by the Library and the Center for Latin American, Caribbean, and Latinx Studies. Dean John Geer welcomed Ambassador Pinzón and the talk was moderated by Felipe Barrera-Osorio.