Have you ever wondered about the history of the beautiful domed building at the end of the Peabody esplanade? If so, you might check out the new exhibit in Special Collections’ series on Vanderbilt’s historic buildings. The exhibit is on display in Special Collections and University Archives and is available as an online exhibit.

Facing north on the south end of the classically inspired and designed Peabody Campus stands what was originally known as the Social Religious Building. At the end of 1913 John D. Rockefeller gave $300,000 for the construction of this building and in the early years it was sometimes referred to as the Rockefeller building. 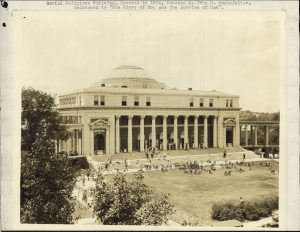 The building was designed by the firm of Ludlow and Peabody and built by Headen Construction in 1914 – 1915. With its magnificent rotunda, it is the largest and grandest of the buildings on the Peabody campus. Over its many decades this building provided space for the Peabody music library, physical education facilities including a swimming pool in the basement; the large elliptical auditorium; offices for the Naval ROTC and the Y.M.C.A. and for a time a place for the Hume Chapel which had originally been the west parlor.

The building since its extensive renovations in the mid 1990’s has been transformed to a state of the art technology teaching and learning center. In 2000 at the time of Joe Wyatt’s retirement as the sixth chancellor of Vanderbilt the building with its large new annex was rechristened the Faye and Joe Wyatt Center for Education in honor of the Wyatts and their dedicated efforts on behalf of Peabody and Vanderbilt and the new education technology so important to teaching and learning. The original name of the building and dedicatory statement requested by John D. Rockefeller are inscribed in stone and remain on the front of the building thus uniting the old and the new at Peabody.