A new exhibition highlighting the history of Mechanical Engineering Hall is now on display in the Special Collections Library. 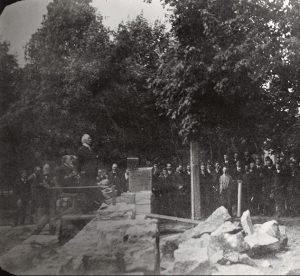 When Vanderbilt University opened in October 1875, classes and laboratories were all housed in College Hall, now known as Kirkland Hall.  By the mid-1880s, the engineering department had outgrown their facilities in College Hall and required more space for their expanding department. Cornelius Vanderbilt II, grandson of the Commodore, donated money to build a separate building for engineering and related sciences to support the growing demand for classroom and laboratory space.

Designed by Dean of Engineering Olin Landreth, Mechanical Engineering Hall, completed in 1888, was the first 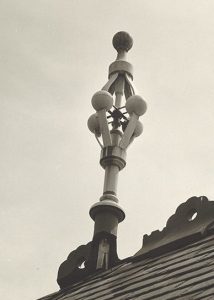 building in Tennessee constructed for the teaching of engineering. Decorative tile incorporated figures from Greek mythology, and friezes around doorways and the building’s exterior depicted 19th century engineering tools. A steam-powered dynamo installed in 1898 supplied heat and electric light to campus buildings until 1918.

When a new home for the School of Engineering was built in 1950, space in Mechanical Engineering Hall was used by other departments on campus.  In 1965, Army R.O.T.C. moved into the building. In 1984, Mechanical Engineering Hall was incorporated into the new Graduate School of Management. A sculpture of a flyball centrifugal governor – a steam engine device for regulating speed – could not be removed without damaging the roof and can still be viewed on the north side of the building.