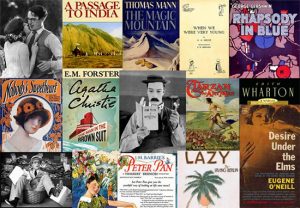 Accessing complete cultural works from 1924 became possible January 1 when works from music and film to art and literature entered the U.S. public domain.  Now these works are free for anyone to use and adapt after 95 years of copyright protection. Originally set to go into the public domain in 2000 after an initial 75-year term of copyright, these works were delayed in entering public domain by 20 years, after the Copyright Term Extension Act of 1998 extended copyright for a total of 95 years.

Where can you find these treasures?  The Internet Archive, Hathi Trust and Google Books are all adding 1924 materials to their websites in their entirety. The Catalog of Copyright Entries hosted by lists titles. Why is this important? As Duke University’s Public Domain Center notes, now youth orchestras can afford to publicly perform music like Gershwin’s Rhapsody in Blue. Educators can share the full historical record.   Highlights from Vanderbilt’s Special Collections include Thomas Nelson Page’s The Red Riders, William Faulkner’s The Marble Faun among others.

The goal of copyright is to promote creativity, and the public domain plays a central role in doing so. Why does public domain matter?  As more works come out of copyright, singers, authors and others can build on a work.  Copyright to It’s a Wonderful Life (1947) was not renewed in 1975. From 1976, TV stations around the country were able to show the film for free, creating a beloved holiday classic out of a former flop.