G is for Gorey: The Remarkable Worlds of Edward Gorey 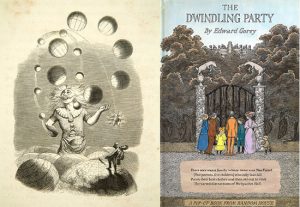 American illustrator and writer Edward St. John Gorey (1925-2000) rose to prominence in the late 1950s for his macabre slant on humorous fiction featuring Victorian and Edwardian settings.  “If something doesn’t creep into a drawing that you’re not prepared for, you might as well not have drawn it,” said the author.  Gorey described his work as “literary nonsense,” akin to the fiction of Lewis Carroll. In 1962, he established his own imprint, Fantod Press, to publish his works, although he continued to illustrate books by other authors throughout his career.  Gorey gained a national following in 1980 after his artwork was animated and used for the opening titles of PBS’s Mystery! television series.

Please join us as we celebrate all things Gorey. “G is for Gorey: The Remarkable Worlds of Edward Gorey” draws from a small but growing collection of Goreyana in Vanderbilt’s Special Collections. Among

the treasures on exhibit are first editions, tarot cards, an autographed program from the Tony Award-winning Broadway revival of Dracula which featured Gorey set designs and costumes, his first published book The Unstrung Harp, a dark children’s pop-up book, The Dwindling Party, his celebrated alphabet books, and other harrowing items.

A curator’s talk by Teresa Gray will take place on Thursday, Feb. 6 in Special Collections at 4:00 p.m.

An upcoming exhibition in the Central Library will highlight the books of the influential French illustrator, J.J. Grandville (1803-1847). From satirical political cartoons to personified flowers, the illustrations of Grandville have been very influential. Grandville moved from his birth city of Nancy to Paris to pursue his career as an illustrator, establishing himself as a skillful political cartoonist. Grandville was interested in human character and physiognomy. While in Paris he published Les Métamorphoses du Jour (1829) with great success. With this book, Grandville came to the attention of the important Parisian political and satirical journals, where he made many contributions as an illustrator.

With increasing censorship, arrests, and government closures of the journals, Grandville moved instead to book illustration. He illustrated editions of popular literature, including The Fables by Jean de La Fontaine which combined his talent as a caricaturist with satirical anthropomorphic tales. Grandville’s reputation as an illustrator was growing and he received a publisher’s commission for his most infamous work Un Autre Monde (1844), considered his most influential work, profoundly influencing the Surrealists. André Breton, founder of literary Surrealism, acknowledged Grandville as an important inspiration and precursor.

In addition, Grandville’s innovative format influenced the development of the graphic novel. Considered a significant work in the art of French illustrated books is Grandville’s Les Fleurs Animées, a two-volume book of 1847. In early nineteenth-century France, historical developments affected the appeal and popularity of flowers, gardens, their symbolic value, and their place in society. The book exemplifies the “cult of flowers” and the pervasiveness of the flower motif in popular culture. Special Collections welcomes these Grandville volumes to the distinctive French collections at the Vanderbilt Heard Libraries.

A curator’s talk by Yvonne Boyer will take place on Thursday, March 12 in Special Collections at 4:00 p.m.