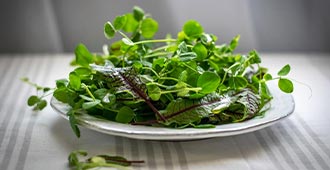 In honor of Shakespeares birthday week, we recreated a salad that you might have seen during Shakespearean times. Salad or “Sallet” to writer John Evelyn (1620-1706) was not an elaborate dish piled high with minced capon (like chicken), capers, and lettuces dressed with sugar. To Evelyn, who in 1699 wrote Acetaria: A Discourse of Sallets, which can be found in the History of Medicine Collection at Vanderbilt University Libraries, salads were “a Composition of Edible Plants and Roots of several kinds, to be eaten raw or green…”

His salads would look familiar today: mixed greens or lettuces, garnished with lemon or orange slices, dressed in oil and vinegar with salt and herbs for flavor.  “Sallet Herbs” listed in Acetaria for April, May and June include cresses, Belgrade lettuce and French sorrel, among others.

Evelyn notes “young seedling leaves of Orange and Lemon may…be mingled with the Sallet.”  Evelyn’s recipes include a vinaigrette made with Tewksbury mustard, horse-radish and cooked egg yolks. His lists of greens are organized according to their ideal cultivation time and he recommends how to order and culture each green.

Evelyn believed in a vegetarian diet. His index included numerous recipes for pickled vegetables (asparagus, broom buds, capers and pickled flowers) that he claimed to have “received from an experienced housewife.” He wrote near the end of his life, recording recipes he had collected and greens he’d eaten.

Our salad combines lettuces, red-leaf sorrel and pea shoots with a mustard vinaigrette.  It’s one Shakespeare might have known or eaten.

Recipe derived from John Evelyn’s A Discourse of Sallets: 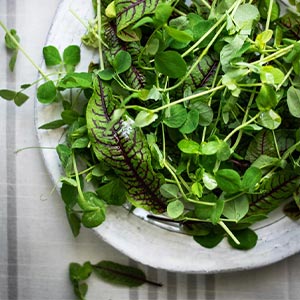 Mix all of the greens in a large bowl.

Whisk together the vinaigrette ingredients in a small bowl until combined.

Pour the vinaigrette over the greens and toss.

Evelyn, John. Acetaria. A Discourse of Sallets. London: Printed for B. Tooke, 1699.
(found in the History of Medicine Collection at Vanderbilt University Libraries)