“An Evening of Stories and Songs with Lee Smith, Jill McCorkle, Marshall Chapman and Matraca Berg,” a fundraiser for Vanderbilt’s Jean and Alexander Heard Libraries, will take place at the Belcourt Theatre on April 11. 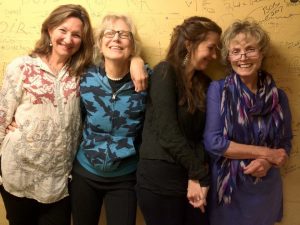 Show time is 7:30 p.m. The hour-long performance will be followed by a book and CD signing.

Since 1998, Smith and McCorkle, both New York Times best-selling authors, have performed with Nashville-based songwriters Chapman and Berg on the rare occasions their schedules permit. The collaboration began when their musical Good Ol’ Girls premiered in Chapel Hill, North Carolina. The New York Times called it “a feminist literary country music review.” Adapted from the fiction of Smith and McCorkle and featuring 14 songs by Berg and Chapman, Good Ol’ Girls opened off-Broadway in 2010.

Tickets are $45 for regular seating. Preferred patron seats, which include a gift bag, are available for $145. Purchase tickets here.