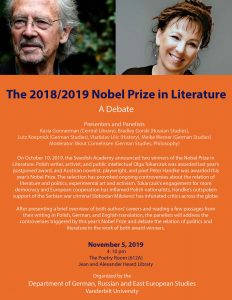 On October 10, 2019, the Swedish Academy announced two winners of the Nobel Prize in Literature. Polish writer, activist, and public intellectual Olga Tokarczuk was awarded last year’s postponed award, and Austrian novelist, playwright, and poet Peter Handke was awarded this year’s Nobel Prize. The selection has provoked ongoing controversies about the relation of literature and politics, experimental art and activism. Tokarczuk’s engagement for more democracy and European cooperation has inflamed Polish nationalists, Handke’s outspokensupport of the Serbian war criminal Slobodan Milošević has infuriated critics across the globe.

After presenting a brief overview of both authors’ careers and reading a few passages from their writing in Polish, German, and English translation, the panelists will address the controversies triggered by this year’s Nobel Prize and debate the relation of politics and literature in the work of both award winners.

Organized by the
Department of German, Russian and East European Studies
Vanderbilt University