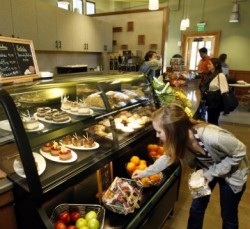 The new café in Vanderbilt Central Library will be known as Food for Thought after a naming survey of the university community generated more than 1,200 responses.

“We were delighted by the overwhelming response from students, faculty, staff and alumni who took the time to express their preferences from a list of ideas initially compiled by our library employees,” Connie Vinita Dowell, dean of libraries, said. She noted that “Food for Thought” was among the three top choices of those who responded, and Richard McCarty, provost and vice chancellor for academic affairs, made the final decision. (more)