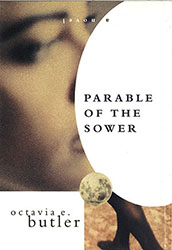 Octavia Butler (1947-2006) was an American science fiction author.  In her early publishing career, she was one of the few Black women authors in a field dominated by white men.   Extremely shy as a child, she found a creative outlet exploring science fiction and fantasy literature at the public library and began writing science fiction stories as a teen.  While attending a local writing workshop, she met author Harlan Ellison who encouraged her to attend the Clarion Workshop, focused on science fiction.  By the late 1970s, she was making enough as an author to stop working a series of temporary jobs.

She published her first novel, Patternmaster, in 1976.  During a break from the Patternmaster book series, Butler wrote her best-selling novel, Kindred (1979) and began publishing her Xenogenesis series in 1984.  She began her Earthseed series with Parable of the Sower (1993) and Parable of the Talents (1998).  Writer’s block and depression prevented her from writing four other titles planned for the series.  Her final novel, Fledgling, a science fiction vampire novel, was published in 2005.

Octavia Butler’s work has been recognized with multiple awards, including two Hugo Awards and two Nebula Awards.  She was the first science fiction author to be awarded the MacArthur Foundation “Genius” Grant.