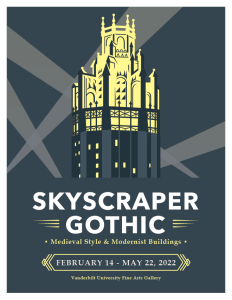 The exhibit is co-curated by Kevin D. Murphy, Andrew W. Mellon Chair in the Humanities, professor and chair of the department of History of Art and Architecture, and Lisa Reilly, Commonwealth Professor of Architectural History, School of Architecture, University of Virginia.

Skyscraper Gothic presents an interdisciplinary interpretation of an important—but overlooked—phase in the stylistic development of the tall office building. Among the most beloved examples of American architecture, skyscrapers such as the Woolworth (1913), Chicago Tribune (1925), Radiator (1924) and Empire State (1931) buildings sparked a wave of objects and images that exploited their forms to announce the advent of a modern American style in the early twentieth century.

Skyscraper Gothic explores how these buildings, sometimes dismissed for their Gothic or Art Deco elements, were originally embraced as emblems of modern American life. The curators trace the pervasiveness of skyscraper Gothic in architectural design on writers, painters, printmakers and designers.

Among the recent gallery acquisitions included are original drawings of the Woolworth building by the office of architect Cass Gilbert. Other new acquisitions include Leon Louis Dolice’s pastel New York Street Scene (1930), Jacob Vanderbilt’s painting View of the Woolworth building in Winter through the Arch of the Municipal Building (1913) and Joseph Pennell’s etching, The Woolworth through the Arch (1921). Childe Hassam’s monumental painting The Skyscraper Window (1934) speaks to how material objects shape our lives as well as our perceptions of the modern age.