When Vanderbilt University first opened in 1875, students lived in university-approved boarding houses near campus. The closest the university came to having a dormitory was Wesley Hall – a former boarding house – which served multiple purposes: housing faculty and divinity students; providing classroom space for lectures; and serving as a library and dining hall. 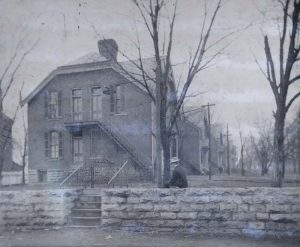 As demand for private boarding houses mounted, Vanderbilt administrators were forced to relent on their ‘no dormitory’ policy, using an 1886 donation of $10,000 from William H. Vanderbilt – the eldest son of Cornelius Vanderbilt – to build four dormitories on the western side of campus to provide lodging for students.

Olin Landreth, Vanderbilt University’s first professor of engineering and, later, the dean of engineering, had been made superintendent of buildings in 1882. This appointment put him in charge of campus maintenance and construction projects. He designed and oversaw the construction of the four dormitories that were called “West Side Row.” The university paid Landreth $500 for his work.

The dormitories were small, two-story cottages built on the site of the university’s planned cemetery. Robert T. Nabors, the university’s first chaplain, was the only person to have been buried in the cemetery. His body was exhumed and moved to Evergreen Cemetery in his hometown of Tuscaloosa, Alabama, before construction began.

Amenities were few on West Side Row. Each building had eight rooms (four per floor) and provided housing for sixteen students. The cottages were built with no interior doors, making the rooms only accessible from their outside entrances. The rooms were equipped with oil lamps for light, a pitcher and basin for students to wash their faces and shave, and a coal-burning corner fireplace. The flues of the eight fireplaces connected to a single, central chimney and the coal for the fireplaces was stored in the basements. A communal water pump in front of the cottages provided the students with water. The kitchen, dining area, and showers for the residents of West Side Row were in the basement of the nearby gym in what is now part of the Office of Undergraduate Admissions.

The original four dormitories were named Alpha, Belleview, Cumberland, and Delphi. In 1887, two identical cottages (named Euclid and Franklin) were added to the row. Since the basement kitchen would not service the increased number of students, a dining hall – called West Side Hall – was built at the same time. West Side Hall had a kitchen, dining room, cellar, and six additional student rooms on its second floor. It was capable of feeding an estimated 108 students.

By 1956, students no longer lived on West Side Row and the buildings were converted into apartments and offices for Vanderbilt’s faculty and administration. Modifications include bricking up the exterior side doors which previously granted students access to the rear of the cottages and installing new interior doors to adapt the buildings for their new uses. In 1966, Alpha was demolished to make way for Carmichael Towers East. 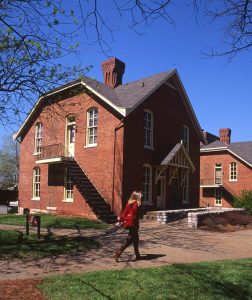 The Office of Student Life, the Office of Cultural Affairs, Alumni Relations, and Vanderbilt University Press are just a few of the many occupants of West Side Row over the decades. K. C. Potter lived in Cumberland while serving as dean of residential and judicial affairs. Euclid – home to the Office of LGBTQI Life – is now called the K.C. Potter Center in his honor. West Side Hall has likewise been adapted over the years. It has served as the home for the campus YMCA, classrooms for the university, and became the headquarters for the Naval Reserve Officers Training Corps in 1945. Though the NROTC has since moved to another part of campus, a portion of West Side Hall’s original structure was incorporated into the undergraduate admissions building which was constructed in 1992.