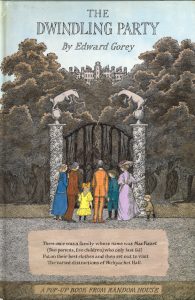 American illustrator and writer Edward St. John Gorey (1925-2000) rose to prominence in the late 1950s for his macabre slant on humorous fiction featuring Victorian and Edwardian settings.  “If something doesn’t creep into a drawing that you’re not prepared for, you might as well not have drawn it,” said the author.  Gorey described his work as “literary nonsense,” akin to the fiction of Lewis Carroll. In 1962, he established his own imprint, Fantod Press, to publish his works, although he continued to illustrate books by other authors throughout his career.  Gorey gained a national following in 1980 after his artwork was animated and used for the opening titles of PBS’s Mystery! television series.

Please join us as we celebrate all things Gorey. “G is for Gorey: The Remarkable Worlds of Edward Gorey” draws from a small but growing collection of Goreyana in Vanderbilt’s Special Collections. Among the treasures on exhibit are first editions, tarot cards, an autographed program from the Tony Award-winning Broadway revival of Dracula which featured Gorey set designs and costumes, his first published book The Unstrung Harp, a dark children’s pop-up book, The Dwindling Party, his celebrated alphabet books, and other harrowing items.