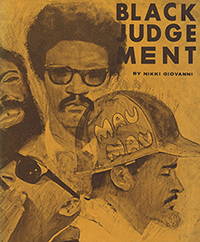 Nikki Giovanni (b. 1943) is one of America’s most respected African American poets.  A poet, essayist, activist and educator, she graduated with honors from Fisk University with a B.A. in history in 1967.  She was the first recipient of the Rosa L. Parks Woman of Courage Award and has received numerous other awards, including seven NAACP Image Awards, and over twenty honorary doctorates.  She is currently a University Distinguished Professor at Virginia Tech University.

Nikki Giovanni self-published her first book, Black Feeling, Black Talk, in 1968.  Rosa, her children’s book on the life of Rosa L. Parks, won the Caldecott Honor Book Award and the Coretta Scott King Award for Illustrators in 2006.  Her book of essays, Racism 101, covers a wide array of topics including inequality in higher education, the legacy of the 1960s, and the neglect of urban schools.