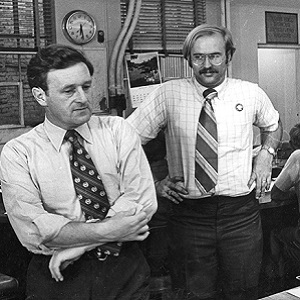 Newspapers have been the daily backdrop to public life throughout the history of the United States, functioning as the Fourth Estate of American democracy. By the beginning of the twentieth century, newspapers were read in nearly every home in the country, serving as a report of the day’s events, a calendar for the community, and a platform for political engagement.

Nashville newspapers have their own unique history. From the divide of the Democratic and Republican parties, two primary newspapers emerged: The Tennessean and the Nashville Banner. Although the city’s liberal and conservative papers shared a building, printing press, and even some staff through a joint operating agreement signed in 1937, they engaged in ideological competition in print for decades. This exhibit examines the lifecycle of a news story, from its initial reporting and discovery, to the meticulous editorial work to make it fit to print, and finally to the printing and distribution across the state. The exhibit also looks at how these stories played out on the pages of the rival Nashville newspapers, up through the demise of the Nashville Banner in 1998.