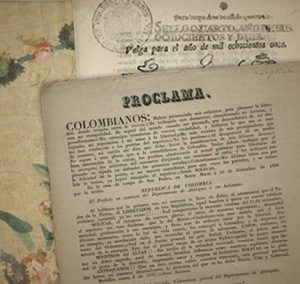 This exhibition will be curated by a cohort of Buchanan Library Fellows and their librarian mentors.

The J. León Helguera Collection of Colombiana is a unique resource housed by the Vanderbilt University Library. The Collection is comprised of thousands of pamphlets, newspapers, books, and broadsides from 19th-century Colombia. Over the past four years, the Library Dean’s Fellows have been instrumental in the digitization of hundreds of these archival documents and in making them available for scholars across the world.

In this online exhibit, the Spring 2017 Library Fellows Andrea and Jessica have focused on documents from the period of early independence in Nueva Granada from 1790 to 1830. During the Latin American independence movements, young nations experienced drastic transformations as new figures rose to power, organized strategic war campaigns, and fought for political autonomy. The four thematic essays in this exhibit supplement the Helguera database by introducing the reader to key themes, figures, and events from the time period. Essay topics include early medicine and smallpox vaccinations; the life of Antonio José de Sucre; early imprints and the printing press; and Francisco José de Caldas’ scientific explorations. The essays exhibit some of the Collection’s early and rare sources, which are also available for viewing in the Helguera database.