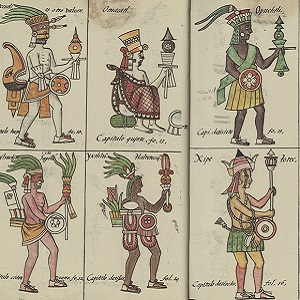 Population movements have been a continuous part of Latin American history and remain instrumental in shaping the region to this day. The exhibition, created by the students in the course “Interdisciplinary Research Methods in Latin American Studies,” demonstrates the various motives that impelled explorers, scientists, conquerors, entrepreneurs, and other travelers to journey to Latin America and document their experiences.

The movement of peoples in Latin America in pre-Columbian times revolved around ceremonial centers and religious ritual events. Following the “discovery” of the New World in 1492, initial periods of violent conquest reshaped the Americas and opened both continents to the trans-Atlantic slave trade, forcibly transporting African laborers in the Middle Passage. Early travelers to the Americas also had religious objectives and sought to evangelize the natives and slaves of the New World. For others, the motive was enterprise; ambitious entrepreneurs sought to harness and exploit the natural resources of Latin America. Academics were fascinated by the region’s natural resources and studied them for scientific, economic, and political purposes. Aspiring anthropologists documented travelogues of their explorations of the vast ruins. Ultimately, some of the richest accounts are the travelogues documented by female travelers who keenly observed the customs and habits of others. The variety of these accounts and perspectives demonstrate not only the travelers’ diverse motivations but also that Latin America has always been in a state of constant flux and change impelled by migration movements.