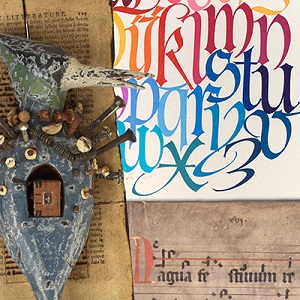 Illuminated manuscript (literally “hand written”) books are arguably the most characteristic objects of the European middle ages. They preserved a culture’s visions, adventures, religious rituals, and hard-won knowledge in books that were entirely handmade simply because there was no alternative. In one sense, the printing press was a threat to the industry because it provided readers with identical, inexpensive books. But it also freed manuscript-makers to concentrate on luxury, one-of-a-kind commissions. Contemporary artists, working in a culture dominated by mass-produced books and digitized screen content, are revisiting the challenges and joys of making a book by hand.

The works in this exhibition were chosen and researched by the undergraduate students in History of Art 2288 taught by Professor Elizabeth Moodey. The course considered the changing material and visual make-up of medieval illuminated manuscripts, and, through them, questions of literacy and audience, the various contributions of script and picture, and the concerns of patron and artist. We explored how much the impact of a work depends on the arrangement of words on the page by looking at examples from medieval grid-poems and pictorial initials, the Arts and Crafts revival of the book arts, and Dada and Futurist publications, to better understand the enduring appeal of a handmade book. Each of the themes examined here brings together a medieval example and a selection of contemporary artists’ books, suggesting that medieval and modern artists share common concerns and draw on similar powers of invention.